The Balance of Boundaries and Privileges Sometimes I joke that when a client asks me “how do I get my dog to stop doing ________?” that I would like to just respond “Don’t let them do it. That’ll be $50.” I’m kidding of course. It does take time and effort to train your dog and teach them “the rules of happy coexistence.” But there is also an element of truth to the joke. When we neglect to give our dogs boundaries, a whole host of unwanted behaviors pop up that most people just don’t know how to correct. When raising a puppy, or even bringing home an older dog, the best thing you can do is set an appropriate balance between boundaries and privileges. It is always easier to start from a place of boundaries and have your dog earn privileges, than it is to give your pup too many freedoms and then have to correct bad behaviors.

I’ll give you a more concrete example. I did an in-home lesson with a six month old German Shorthair Pointer. He had all the usual puppy stuff like biting, jumping, chewing, a lack of impulse control. But the family’s primary concern was that he liked to run off to visit the neighbors. When I pressed for more information, they told me that they had 18 acres of property, and their neighbors had about 12 acres, and the pup would disappear from their yard and go visit the neighbors who were playing with him and giving him treats. They didn’t want this puppy to leave their yard to go play with their neighbors, so how do they stop him?

I wanted to say “Don’t let him do it. That’ll be $50,” but instead of being a smart-aleck to a genuinely concerned client, I explained to them that dogs repeat behaviors that are rewarded, and that going to get treats and playtime from the neighbors is extremely rewarding. Unless they could offer him something that was more rewarding, he would never stay in the yard. OR they could impose boundaries on him and remove the reward of the neighbors. How? He doesn’t get free range outside to make his own decisions. He goes out only on a leash until you’ve done the training to make listening to you more valuable than visiting the neighbors. A dog that has 18 acres and all day to himself is a free dog. Why would he listen to you when he gets to do whatever he wants and gets rewarded for leaving your property?

This doesn’t mean that privileges are bad. Being allowed on the sofa isn’t a bad thing in itself, neither is not being crated during the day or sleeping in the bed with you, but these are freedoms and privileges that are better earned than freely given. This is why most dog trainers are huge believers in crate training. Dogs have about 4-6 seconds to pair an action with a reward or punishment. This means that if your dog pees on the rug or chews up a throw pillow and you come home hours later, they have no idea why you’re upset. They may act guilty because they can tell you’re mad, but it is hard for them to put the two together, especially when they’re little. You have to catch them in the act in order for them to understand a specific choice is inappropriate. Therefore, when you’re not around or not focused enough to catch them in the act, the best thing to do is take away their ability to make the bad decision, hence a crate. If your puppy is running around and playing during potty-time, take away his freedom to run around and play by pottying him on a leash. I’ve even gone so far with my Kona as to tie the leash to my waist while I do my chores because I couldn’t trust her not to sneak off and get into something while I was folding the laundry.

In fact, little Kona led an extremely structured life when she first joined our family. She was either in her crate, on her “place,” or on leash and tied to me most of the day. Then we had very supervised off-leash play time with her ball in a fenced in area. I couldn’t trust her not to make good decisions, so I took away her ability to make bad decisions until we had trained more. Then, as her impulse control grew and she learned her boundaries, she gradually earned more freedoms. She is rarely crated anymore, sleeps in the bed with me, and is often off-leash. She is still extremely energetic, but has excellent impulse control and is more obedient than her big sister, who had a very different upbringing!

Imposing boundaries not only helps your dog learn right from wrong, but they also help in the development of impulse control and a reliance on you as their reward system. They help create a more obedient and less impulsive dog because the dog is learning what is and is not appropriate. In the meantime, training for relationship and obedience will allow them to earn privileges and freedoms when they can handle them, and then you’re able to trust that they will make better decisions when you’re not able to enforce them. If your dog has some behaviors that drive you crazy, think about why those behaviors may exist, and ask yourself if imposing some boundaries might help the situation! 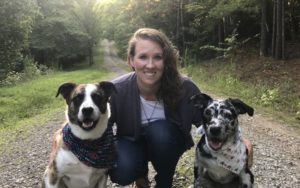